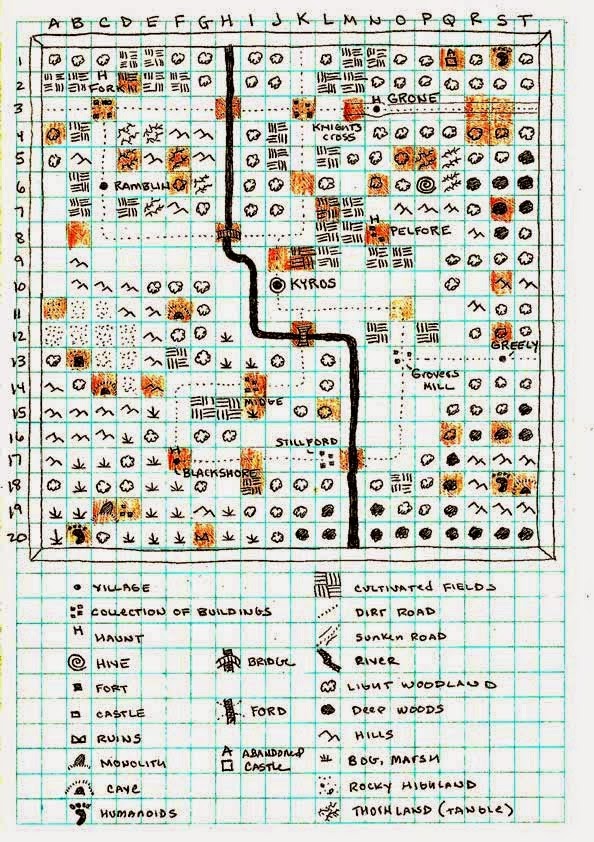 Hi Guys.  Diving right in to some additional encounters for the map to the right.  Picking up where we left off...

This stone bridge has something of a reputation with those few survivors remaining in Kyros, Ramblin and Knight's Cross.  Most locals will not think to mention the place as the local history regarding it is so widely known and "old hat" but they will probably share if questioned.

This narrow, five foot wide stone bridge spans the river two miles North and West of the ruins of Kyros.  Because the river is narrow here it passes beneath in a faster rush than in other places and the river bed has worn deeper and deeper over the years.  Otherwise it is a simple looking structure with iron posts for hanging lanterns at the corners.  All but one of these is empty.

The Legend:  The bridge was built a hundred and fifty years ago to replace the ford and raft which were once here and to move trade more easily between the growing village of Ramblin and the city of Kyros.  A man named Forthbright had owned the ferry business up to the building of the bridge and was compensated by the Kyros nobility a fair sum since the bridge would take away his living.  Forthbright took the money and moved to Ramblin and lived well there for some years.  Eventually Forthbright married a pretty local girl named Penelia.  They lived together happily enough until some dark mood overtook Penelia Forthbright and one stormy night she walked the six miles from Ramblin to the bridge to throw herself into the river.  Forthbright learned of her plan and thundered out of Ramblin on one of his steeds to stop her.  Penelia never went through with her plan.  Instead she walked on to Kyros with plans to end her life with Forthbright.  Forthbright, riding desperately through the dark, was thrown when his horse took a wrong step and broke his neck before reaching the bridge.  He died almost instantly.  His horse was put down shortly after they found Forthbright's body in the road only a hundred yards from the bridge.  Forthbright and his horse were buried together in the light woodlands immediately NW of the bridge.  It is said that on stormy nights the desperate ghost of Will Forthbright rides again from Ramblin to the spot where he died, never reaching the bridge.  There are no legends of the spirit attacking anyone on the road but seeing Will Forthbright on his ride is considered to be a very ill omen.

Today the bridge has been occupied by a small band of dwarves.  These fellows are disgusted with the presence and activities of the elves in the region.  Not the undead clearing.  The dwarves approve of THAT...its the sneering, nasty, hostile attitude of the elves they find offensive.  Between the elves and the orc patrols the dwarves have had enough.  The bridge is stone.  It occupies a key location the road.  WIth a little added mason work to raise walls and a stone roof the dwarves are turning the Hard Ride bridge into a small fortification.  Passage over the bridge can be made by ascending a few steps onto the new stone roof and walking along this roof to stairs on the far side.  The dwarves are willing to allow passage for a donation of good food, good drink, gold or silver (in that order).  Elves are not allowed on the bridge.  Horses will find the passage a little taxing but not if they are carefully led by the reigns.  Carts no longer can pass this way.

The leader of the dwarves is named Byorgran Alegrasper.  There are twenty dwarves here in all.  They are armed with axes, daggers and six  heavy crossbows.  The dwarves are in the process of crafting a ballista to add to the defenses but this is nowhere near being finished.

A heroic fight occurred here in the not so distant past but it is now over.  The enormous hulk of a hill giant sprawls across the road.  Dozens of buzzards circle in the air overhead and dozens more complain and argue on the corpse.  The stink here is nearly unbearable and clouds of thick black flies blanket the corpse.

DM Note: An inspection will reveal that the rotten flesh is pierced numerous times both what appear to be lance points and a great many green and black fletched arrows.  The arrows are of good quality with heads of neatly crafted flint.  An elf or dwarf will recognize the arrows as elf made.  The giant still wears some rudimentary garb but any items of value he may have carried are now gone.

DM Note #2:  While the elves dispatched this giant they neglected to burn the corpse.  Should a pattern storm move through the arrow it is possible that the glowing hail will reanimate the body.  Make a note whether the players think of this and dispose of the dead giant.  Disposal can take hours and burning the corpse will put up a pillar of black smoke visible for miles.  Roll for random encounters hourly so long as the corpse burns.  It takes a full five hours to burn the giant sufficiently that it will no longer return as an undead.

Incredibly, dozens of dairy cows appear to graze in the pastures of the farms in this area.  One of the farms appears to be in good condition, at least from the road.  It consists of a large two story farm house, large barn and several out buildings.  On closer inspection the cows are sickly looking and covered in sores.  A bell clangs in the yard of the farm and the cattle wander in that direction.  For some reason the zombie farmer here goes through the routine of milking the cows every morning and every evening, without fail.  In all other ways he is a standard zombie but with three hit dice rather than the usual number.  Of course the barn is inhabited by a dozen zombie cats and the farm house is occupied by the farmer's wife and a half dozen zombie children.  The wife goes endlessly about the practice of chopping things with a large cleaver in the kitchen.  The children wander around listlessly, bumping into things mostly and moaning.

The farmer had an office and in the desk is a locked wooden strong box containing 40 gold and 134 silver pieces.